For the love of donuts and life’s other guileless pleasures… I am the Madame at Donut Dynamite! 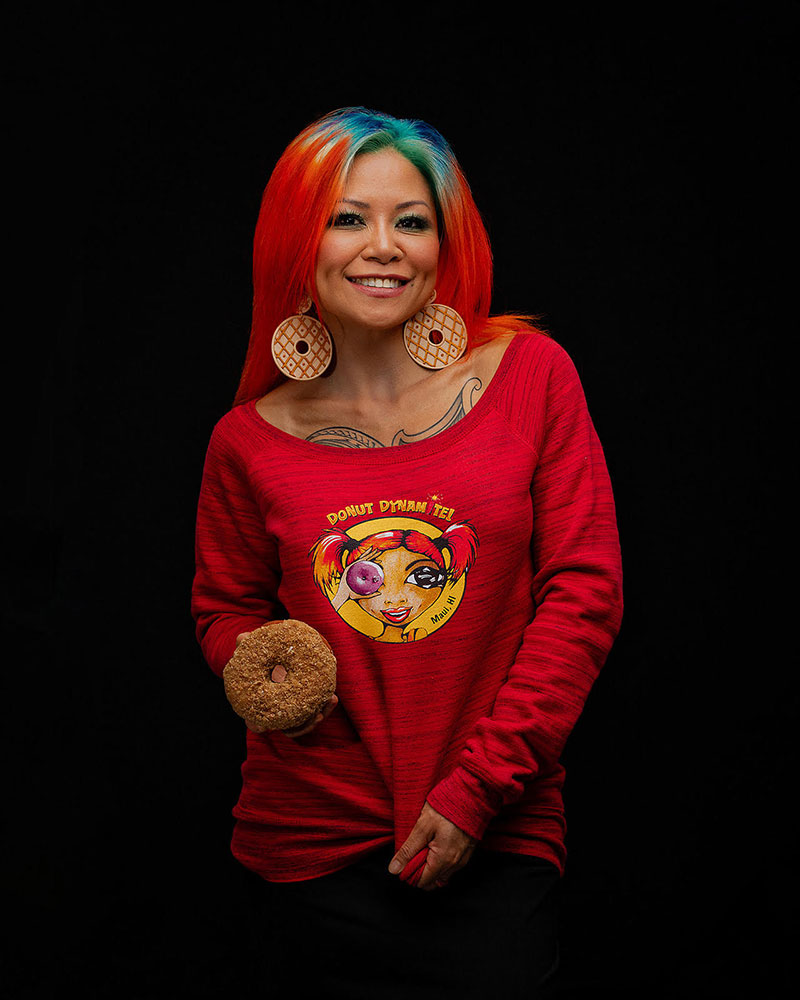 Madame Donut and I are talking sprinkles. It is a subject about which she has strong feelings. The ubiquitous little rainbow colored grains of sugar and cornstarch invented by a Dutch confectionaire named Jong over a hundred years ago are not much more than eye-candy. Try a thimble full of them, they taste like stale cake icing made without enough sugar. These days most people who peddle sweet treats get their sprinkles in bulk from the local restaurant distributor. But Madame Donut will only use the sprinkles she makes in her own kitchen. When her bookkeeper recently advised those sprinkles were costing too much money, she threatened to fire him. I sample her house-maid variety and understand why she feels so strongly about them.

“When you make your own sprinkles, you can color them anyway you like,” she tells me. And color is central to Madame Donut’s life.

“You should sell these things, they’re amazing,“ I tell her.

“There’s only so much time in the day,” she laments. But I can see her unconsciously filing the idea away in her fertile mind.

The proprietress and chef of Central Maui’s Donut Dynamite! is also the company’s living mascot and it can be a little difficult to tell where Madame Donut ends and her dazzling 360 degree creations begin.  In our first interview her shoulder length mane was dyed banana yellow and shamrock green. A few weeks later it had transformed into an elaborate kaleidoscope of eight or ten different hues. When I wondered how much time she spent making the frequent color changes, Madame Donut replied, “Don’t ask.”

Are the constantly evolving offerings at Donut Dynamite! a manifestation of Madame’s own frenetic personal fashion sense? Or is it the other way around? She discourages both friends and fans from using her real name, which by the time you read this, may actually be Madame Donut. She’s already filed the papers to change it. In the meantime, she goes by DD.

“After I got divorced I thought about reclaiming my maiden name and I thought, ‘Wait, that doesn’t make any sense. I’m Madame Donut, now.” That would be hard to deny.

The nick-soon-to-be-name lavishly proves-up Madame’s claim of total commitment to the cause of the lowly donut – a cause few graduates of the Culinary Institute ever take up. But the Valley Isle’s favorite donut dealer (and Instagram’s favorite PG-rated, pastry-babe) has made a lot of unconventional choices in her life, like starting school at four because of childhood FOMO.

DD spent her first seven years in a tiny village north of Luzon and has come a very, very long way since then. Her child-like face is fixed in a perpetual grin and she has a bountiful head of hair that serves as the palette for a devious fascination with the color wheel. She might be anywhere between twenty-five and forty but it’s clear she won’t be sharing her age with me.

“I’m a lot younger than you,” she allows.

The dye jobs can get tedious but Madame Donut would no more wear a wig than she would use store-bought nonpareils on her outrageously popular, ultra-premium donuts. They’re available only once a week, made from a special brioche-dough recipe and topped, filled and infused with everything from lilikoi glacé to applewood smoked bacon to edible flowers, and of course those bespoke sprinkles. About the only ingredient that Donut Dynamite! doesn’t source locally is the flour.

“Flour is complicated stuff. First of all, there’s no wheat growing here on Maui. And if I talked some farmer into planting it, I’d have to find a gristmill somewhere.” I can’t tell if she’s kidding.

A while back, way before Madame Donut, DD joined a band in Manila when she was sixteen. A childhood addiction to Karaoke had made her a good singer and the band was a local hit. She’d neglected to tell her mom, who was not happy when she found out. DD’s mother had always seen other paths for her precocious wild-child. When the band got a chance to go on the road, Mom put her foot down and the outfit left town with a new singer.

But born entertainers never stay out of the game for long and a little over a year later DD landed another gig, this time with a cruise ship band that would be visiting a lot of the places she’d dreamed about as a little girl growing up in the sticks. When her mother objected this time, eighteen year-old DD told her that she was sorry and sailed out of Manila harbor and into a big new life.

Singing for her supper at sea held DD’s interest for almost six-months before she stowed her Philippines passport and seaman’s visa in a duffel and jumped ship in Alaska.  “I finally got the chance to go anywhere in the United States I wanted. So of course, I headed for New York.” Of course.

The story speeds up then, a few more twists and turns to be navigated before the legend of M. Donut dawns in Hawaii. There were those few years in New York that turned her head in a hundred different directions, the last being West, to culinary school in Napa Valley. Several years as a successful pastry chef in some of Northern California’s finest restaurants left DD feeling like a big girl in a little boy’s world. But instead of pouting about it (the way big girls sometimes do) she married one of those boys and dragged him into her world, instead. She soon headed West again with her new husband in tow and the couple landed on Maui.

They started Donut Dynamite! as a labor of love in 2013. DD’s already considerable skills as a baker blossomed when she laser-focused on a solitary goal: Making the best damned donuts she could possibly figure out how to make – while having a blast doing it. Meanwhile, Monsieur Donut focused on the books and other less glamorous aspects of the donut business. Donut Dynamite! was an immediate success from the day it opened in 2013 until 2020, the year the marriage hit the rocks. Following an amicable split, he left to ride motorcycles on the mainland and she prepared to run Donut Dynamite! solo for the first time.

Then COVID hit. More than most places, Maui’s economy got creamed by the pandemic. But Donut Dynamite! kept its doors open and garnered even more loyalty from an already rabid customer base. Folks had many of their small everyday small luxuries suddenly yanked away from them with little warning. There were no more manicures or movies or lunch dates – but there were still some of the world’s best donuts every Saturday morning down on Lower Main Street in Wailuku Town. The store sells out every weekend.

Madame has weathered the almost two year pandemic storm without her co-founder and with the help of a lot of her friends and customers. If that light at the end of the pandemic tunnel isn’t a freight train (or another vicious variant like Delta) Madame Donut says 2022 is going to be a better year. “Our sales are headed back up and we’ve got some exciting plans coming right around the corner. And of course, our customers love us as much as we love them.”

A group from Japan approached DD about opening a Donut Dynamite! in Tokyo and the deal is showing definite signs of life despite some gusty COVID headwinds. She says there are still more projects than time to do them. A glance at her social media confirms she is a woman with a whole lot going on. From choreographed Samurai sword fights on the La Perouse lava flow (featuring donuts?) to her continuing quest for the perfect sprinkle, Madame Donut doesn’t figure to run out of ideas or energy anytime soon. The hair and wardrobe changes alone require a lot of stamina.

When I ask how a donut chef maintains a rock hard body like hers, she demurs, then turns her mischievous smirk on me and announces, “OK, interview over. Next thing I know you’ll be asking for my recipes.”

As we say goodbye, Madame Donut presses a big sixty-dollar box of heaven into my chubby arms and tells me the secret to happiness is eating a lot of her donuts and not worrying about your weight. Now that is world beating notion. There’s a reason that Madame’s donuts sell for five dollars apiece.

With those homemade sprinkles, she could easily get six.